The General Government (German: Generalgouvernement, Polish: Generalne Gubernatorstwo) refers to a part of the territories of Poland under German military occupation (that were occupied in September 1939) during World War II by Nazi Germany and was an autonomous part of "Greater Germany". In August 1941, former Polish voivodeships of Eastern Galicia (with a minority of Ukrainian population), which since September 1939 had been occupied by the Soviet Union (see: Soviet invasion of Poland) were added to the General Government (as Galicia District) by decree of Adolf Hitler.

According to section III of the Fourth Hague Convention (1907),[1] accepted by Germany, all these acts were illegal from the beginning in the terms of international law (The Law of Nations), and civil law too. The area was not a puppet state and had no goal of collaborating with Poles throughout the war, regardless of their political orientation. Germans made a determined effort to avoid mentioning the word Poland in each and every document or administrative naming regarding the region, the only exception being the Germany-backed banknotes and coins (denominated 'zloty' and 'grosz') printed in 1940 where that word was used for propaganda purposes. The government and administration of General Government was composed entirely of Germans and the area was eventually to become a German province[2]. The only locals remaining would be those of German descent.

On 26 October 1939, Hans Frank was appointed Governor-General of the occupied territories. In March 1941 Hitler made a decision to "turn this region into a purely German area within 15-20 years." He also explained that "Where 12 million Poles now live, is to be populated by 4 to 5 million Germans. The Generalgouvernement must become as German as Rhineland."[2]

During the Wannsee conference on January 20, 1942, The State Secretary of the General Government, Dr. Josef Bühler pushed Heydrich to implement the "final solution" in the General Government. As far as he was concerned, the main problem of General Government was an overdeveloped black market that disorganised the work of the authorities. He saw a remedy in solving the "Jewish question" in the country as fast as possible. An additional point in favor was that there were no transportation problems here.[3]

In 1942, the Germans began the systematic extermination of the Jewish population. The General Government was the location of four of the six extermination camps in which the most extreme measures of the Holocaust, the genocide by gassing of undesired "races", chiefly millions of Jews from Poland and other countries, was carried out between 1942 and 1944 .

Overall, 4 million of the 1939 population of the General Government area had lost their lives by the time the Soviet armed forces had taken the area in late 1944. If the Polish underground killed a German, 50--100 Poles were executed as a punishment and warning.[4]

It was German policy that a small number of (non-Jewish) Poles, like other Slavic peoples, were to be reduced to the status of serfs, while the rest would be deported or otherwise eliminated and eventually replaced by German colonists of the "master race." Various plans regarding the future of the original population were drawn, with one calling for deportation of about 20 million Poles to Western Siberia, and Germanisation of 4 to 5 million; although deportation in reality meant that the population wouldn't be removed but all of its members put to death as happened to other groups in execution of similar plans.[5] In the General Government, all secondary education was abolished and all Polish cultural institutions closed. In 1943, the government selected the Zamojskie area for further German colonisation. German settlements were planned, and the Polish population expelled amid great brutality, but few Germans were settled in the area before 1944 . See Generalplan Ost for more information about this.

Resistance to the German occupation began almost at once (see: Henryk Dobrzański), although there is little terrain in Poland suitable for guerrilla operations. The main resistance force was the Home Army (in Polish: Armia Krajowa or AK), loyal to the Polish government in exile in London. It was formed mainly of the surviving remnants of the pre-War Polish Army, together with many volunteers. Other forces existed side-by-side, such as the communist People's Army (Armia Ludowa or AL), backed by the Soviet Union and controlled by the Polish Communist Party. By 1944 the AK had some 380,000 men, although few arms. During the occupation, the various Polish resistance organizations killed about 150,000 Axis soldiers. The AL was about 15% of the size of the AK.

In April 1943 the Germans began deporting the remaining Jews from the Warsaw Ghetto, provoking the Warsaw Ghetto Uprising, April 19 to May 16. That was the first armed uprising against the Germans in Poland, and prefigured the larger and longer Warsaw Uprising of 1944.

In July 1944, as the Soviet armed forces approached Warsaw, the government in exile called for an uprising in the city, so that they could return to a liberated Warsaw and try to prevent a Communist take-over. The AK, led by Tadeusz Bór-Komorowski, launched the Warsaw Rising on 1 August in response both to their government and to Soviet and Allied promises of help. However Soviet help was never forthcoming, despite the Soviet army being only 18 miles (30 km) away, and Soviet denial of their airbases to British and American planes prevented any effective resupply or air support of the insurgents by the Western allies. After 63 days of fighting the leaders of the rising agreed a conditional surrender with the Wehrmacht. The 15,000 remaining Home Army soldiers were granted POW status (prior to the agreement, captured rebels were shot), and the remaining civilian population of 180,000 expelled.

As the Soviets advanced through Poland in late 1944 the General Government collapsed. Frank was captured by American troops in May 1945 and was one of the defendants at the Nuremberg Trials. During his trial he converted to Catholicism. Frank surrendered forty volumes of his diaries to the Tribunal and much evidence against him and others was gathered from them. He was found guilty of war crimes and crimes against humanity and on October 1, 1946, he was sentenced to death by hanging. The sentence was carried out on October 16.

The General Government had no international recognition. These territories were never intended as any future Polish state within German dominated Europe. It could be compared to a type of colonial state (although it was not a part of the Third Reich) with many characteristics of a police state. It cannot be seen as a Polish puppet government, as there was no Polish representatives on anything but the local levels.

The capital of the General Government was located in Kraków. The official language was German. Some institutions of the old Polish state were retained in some form for the ease of administration. Polish Police, with no high-ranking Polish officers (who were arrested or demoted) was renamed and known as the Blue Police, became subordinated to the Ordnungspolizei. Polish educational system was similarly kept, but most higher institutions were closed. Polish local administration was kept, subordinate to new German bosses. Polish fiscal system, including the złoty currency, was kept, with revenues now going to the German state. A new bank was created, and was issuing new banknotes.

After the war, Polish Supreme National Tribunal declared that the government of the General Government was a criminal institution.

Other than summary German military tribunals, no courts operated in Poland after the German invasion till early 1940. At that time, Polish court system was reinstated and was allowed to continue decision making in cases not concerning German interests or citizens. In addition to the Polish court system, a German court system was created. In case of any overlap of jurisdiction, the German system was given priority. New laws were passed, discriminating against the Poles, and in particular, the Jews. In 1941 a new criminal law was introduced, introducing many new crimes, and making the death penalty very common. A death penalty was introduced for, among other things:

German police in the General Government was divided into:

Two decrees by Hitler (8 October and 12 October 1939) provided for annexation of western and northern areas of Poland into the Third Reich. The remaining block of territory was placed under an administration called Generalgouvernement für die besetzten polnischen Gebiete (The General Government for the occupied Polish territories). Its capital was at Krakau (Kraków) and it was subdivided into four Distrikts (districts). These were Distrikt Warschau, Distrikt Lublin, Distrikt Radom, and Distrikt Krakau. After the German attack on the Soviet Union in June 1941, East Galicia, previously part of the Ukrainian SSR, was incorporated into the General Government and became its fifth district, Distrikt Galizien.

The districts were further sub-divided into Stadtkreise (city districts) and Kreishauptmannschaften (county administration crews). Following a decree of 15 September 1941, from October 1 1941 the names of most of the major cities (and so administrative divisions) reverted to their previous German names, or were given germanified versions of their Polish/Ukrainian name if none existed (the previous names remained valid as well). As of 1 October 1941, the districts were as follows (Polish/Ukrainian name in parentheses):

The population in the General Government's territory was initially about 12 million, but this increased as about 860,000 Poles and Jews were expelled from the Germany-annexed areas and "resettled" in the General Government. Offsetting this was the German campaign of extermination of the Polish intelligentsia and other elements thought likely to resist. From 1941 disease and hunger also began to reduce the population. Poles were also deported in large numbers to work as forced labor in Germany: eventually about a million were deported, of whom many died in Germany.

In 1940 the population was divided into different groups. Each group had different rights, food rations, allowed strips in the cities, public transportation and restricted restaurants. Listed from the most privileged to the least:

Since fall 1939, Poles from other regions of Poland conquered by Germany were expelled to the General Government and the area was used as a slave labour camp from which men and women taken by force to work as slave laborers in the factories and on the farms in Germany.[2]

Inhabitants of the GG were often forced to work for the Germans: see Baudienst and Forced labor in Germany during World War II.

Former Polish state property was confiscated by the General Government (or the Third Reich on the annexed territories). Notable property of Polish individuals (ex. factories and large land estates) was often confiscated as well. Farmers were required to provide large food contingents for the Germans, and there were plans for nationalization of all but the smallest estates.

The wall of the Warsaw Ghetto being built under the orders of Dr. Ludwig Fischer, Nazi governor of the Warsaw district, August 1940

Announcement by the Chief of SS and Police 5.09.1942 — Death penalty for Poles for any help to Jews

Warsaw Ghetto Uprising, April 1943: Warsaw Jews being held at gunpoint by SS troops (from a report written by Jürgen Stroop for Heinrich Himmler)

Polish inmates of Pawiak prison hanged by Germans in Leszno Street, Warsaw, 11 February 1944 (photo taken secretly from tram by a member of the Polish Home Army) 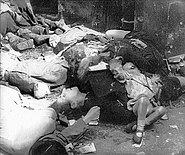 Portrait of a Young Man (Francesco Maria della Rovere) by Raphael, stolen at the behest of Hans Frank in 1939 and never returned. One of at least 40,000 stolen works of art from collections in Poland
Add a photo to this gallery

Retrieved from "https://nations.fandom.com/wiki/General_Government?oldid=4942"
Community content is available under CC-BY-SA unless otherwise noted.